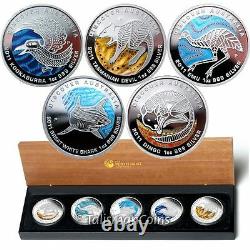 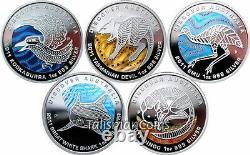 Discover Australia and experience the Dreaming with this complete set of Aboriginal animal art, struck in pure silver! The designer of this unique silver dollar. Set is none other than Darryl Bellotti, who also has designed the Australian Koala coins. As well as the Rectangular Dreaming coins.

He is an indigenous or native Australian, what we call an Aborigine, who for generations untold coexisted with the endemic Australian animals, hunting them as necessary but always respecting their Spirits. Separate articles in this presentation explore this noteworthy animal.

Series; the artist; the Dreaming and Dreamtime; and the animal itself! Discover Australia - The Dreaming Series.

The Discover Australia - The Dreaming. Designs were created by Darryl Bellotti, an Australian Indigenous (aboriginal) artist of both Yamatji and Nyoongar descent. Bellotti is inspired by his boyhood memories of hunting trips in northwestern Australia, where he observed the unique fauna of the island continent and was guided by his elders. The aboriginal art depicts the animal surrounded by patterns that symbolize the Dreamtime and the native landscape of the outback. There is huge international interest in Australian Indigenous art.

Created through the millennia on rocks, on bark, on canvas and in sculpture, the oldest ongoing artistic tradition in the world stretches back tens of thousands of years. The coins of the Discover Australia - The Dreaming Series. Represent the perfect marriage of precious metals and modern technology with native Australian, aboriginal designs. Each is an original and investment caliber work of fine art. For more information and pictures of Australian aboriginal artist Darryl Bellotti, including an extensive interview, please see the article at the end of this presentation.

This luxurious five coin set contains each and every one of the five silver proofs issued this year in the Discover Australia - The Dreaming series. The five animals featured this year are: Dingo (Native Dog). The mint images of these beautiful proof coins do not do them justice.

The translations are inadequate and nearly completely unrelated to the Western concept of dreams. The Dreamtime is the "Time Before Time", or the sacred "once upon a time" of the Aborigines. During the Dreamtime, the ancestral, totemic Spirit Beings formed all of creation. Traditional Australian indigenous peoples embrace all phenomena and life as part of a vast, complex system of relationships which can be traced directly back to the ancestral totemic Spirit Beings of the Dreamtime.

Different spirits inhabit each and every aspect of creation, so the echoes of the Dreamtime can be seen and felt everywhere. The Dreaming refers to an individual's or group's set of beliefs or spirituality. For instance, an Indigenous Australian might say that s/he has Kangaroo Dreaming, or Shark Dreaming, or Honey Ant Dreaming, or any combination of Dreamings pertinent to his or her spiritual being. The Dreamtime laid down the patterns of life for the Aboriginal people, while the Dreaming is the spirituality passed on from the inception of creation. The Perth Mint of Australia employs its own proprietary colorization technology, in which the color is actually sealed on the coin. The vibrant hues and precise execution of the technology create a stunning, full-color portrait on each coin. An Indigenous Australian portrait of each of the five animals, in its native habitat as represented by the splashes of warm color. The legends DISCOVER AUSTRALIA and each animal's name define the theme, while the legend 1 OZ 999 SILVER guarantees the weight and purity. The Perth Mint's "P" mint mark is also present. Her Majesty, Queen Elizabeth II of England, in crowned profile facing right. This portrait, featuring Her Majesty wearing a tiara and pearl earrings, was executed by the sculptor Ian Rank-Broadley.

The legend ELIZABETH II and the denomination also appear. The five coins are encapsulated inside an elegant, luxury presentation case with a native Australian jarrah wood lid, protected by a full-color outer box. An individually-numbered set of certificates of authenticity is included. Jarrah is a species of eucalyptus tree found in the southwest of Western Australia. Because of its similar appearance to mahogany, jarrah is sometimes referred to as Swan River mahogany, after the river that runs through Perth.

Much of the inspiration for Darryl Bellotti's stunning artistic creations comes from traditional Aboriginal art. Yet there is a contemporary, innovative feel to his work that stamps it with his own unique style. ÂYou will identify it as Australian Indigenous art, but I also want you to recognize it as mine as soon as you see it, Â is the way he explains his aim. Darryl deliberately sets out to challenge people's understanding of what they perceive as Indigenous art. For example, he resists the use of too many dots, which would not have been successful in the context of his coin designs.

He also strives for a modern edge, finding the design technology available at the Mint to be helpful. Behind the designs for The Dreaming Series.

Lies Darryl's fascination with the interaction of Australia's native wildlife within the vast and varied landscape. The inspiration for each piece emerges as he imagines himself in the midst of the natural environment, where he relives the experience of its colors, warmth, textures and sounds in his mind. It comes naturally to him, having been brought up for an expected life in the bush. Intensely familiar with many Australian native animals, Darryl observes them in his mind's eye, searching for a telling movement or posture which will reveal its experience.

The different treatments of the kangaroo illustrate the result of this contemplative process. He shows its power and speed a reaction maybe to being startled by a predator or a bush fire. The colored element, symbolizing Australia's red dirt, seemingly explodes beneath the impact of its feet.

In contrast, the gold coin. Portrays the animal in a calm mood its relaxed, comfortable stance revealing a tranquil, undisturbed moment, maybe at dusk as it comes out to feed.

Darryl subtly reminds us that the animals existed in harmony with the land long before the appearance of mankind. References to courtship rituals and progeny are used to symbolize their ancient process of renewal. I have an inherent ability to tell a story, Darryl explains, My art, as well as the music I write, is art of my story telling. In the case of The Dreaming Series.

It conveys the respect he has for the animals in the beauty of their own environment. The message reflects his optimism for the future. It feels as though everyone is starting to wake up and see things the way my people have been taught for so long through ancient stories about the Dreaming.

Each coin design, depicted with fluid shapes and patterns inspired by nature, represents Darryl's tribute to the animal. My main hope is that people might say,'Oh, why is this happening? , or'Why is the animal doing that? They may never have even seen a brolga before. If they think it's beautiful, they might learn a bit more about it.

They might want to learn about the traditional people who live on the land inhabited by these animals. The item "2011 Discover Australia Dreaming 5 Coin $1 Silver Proof Set Kookaburra Shark Emu" is in sale since Sunday, December 13, 2015. This item is in the category "Coins & Paper Money\Coins\ World\Australia & Oceania\Australia\Proof Sets". The seller is "talismancoins" and is located in Saint Louis, Missouri. This item can be shipped worldwide.