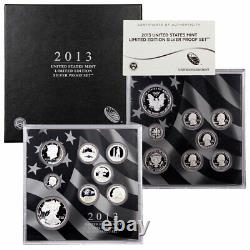 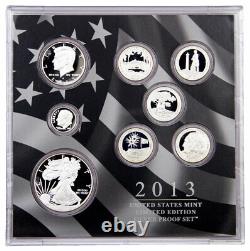 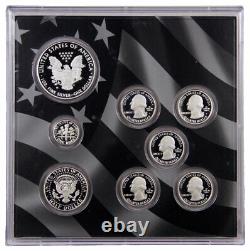 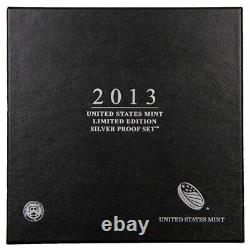 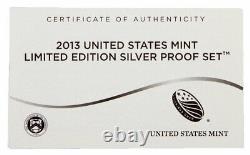 2013 S United States Mint Limited Edition Silver Proof Set OGP SKU33459. Why add this 2013-S United States Limited Edition Silver Proof Set to your collection? This 2013-S Limited Proof is perfect for collectors who appreciate the designs of America's circulated coinage. The set consists of an American Silver Eagle, a Kennedy Half Dollar, a Roosevelt Dime, and the five 2013 America the Beautiful Quarters.

Just 50,000 of these sets were minted. Each coin bears the "S" mint mark of the San Francisco Mint. This set consists of eight coins.

The set includes five America the Beautiful Quarters. Quarters in the set represent New Hampshire, Ohio, Nevada, Maryland, and South Dakota. Each coin in the set was struck from 90% fine silver, except for the Silver Eagle which is. This set will arrive in GEM Proof condition in its Original Government Packaging.

South Dakota's quarter features one of America's most famous landmarks, Mount Rushmore. Other coins: The American Silver Eagle features the iconic Walking Liberty design of Adolph Weinman on the obverse and John Mercanti's adaptation of the Great Seal of the United States on the reverse. The Roosevelt Dime and Kennedy Half Dollar feature left-side portraits of the Presidents for whom the respective coins are named on the obverse. The reverse of the dime bears a torch flanked by two branches, and the reverse of the half dollar bears a modified version of the Presidential Seal. Add this United States 2013-S Limited Edition Silver Proof Set to your collection today.

Specifications for this 2013 S United States Mint Limited Edition Silver Proof Set OGP SKU33459. We cannot make any price adjustments after the sale is complete. Product Photo Policy: MCM attempts to display product images shown on the site as accurately as possible. We take all of our photos in house and due to reflections on the mirrored or proof surfaces of a coin there may appear to be'black' when there is not.

If a coin has a color on it at all it will be described as'colorized' in the description or title. Due to the large inventory we sell, we use stock photos. Serial numbers will vary from the image shown unless specifically stated in the product listing that the item pictured is the item you will receive.

INTERNATIONAL ORDERS POLICY: We are accepting international orders from select countries. These charges are the customer's responsibility.

However, we cannot guarantee this due to the volume of orders we process each day. Beyond the 30-day return period, Company is under no obligation to accept return of any product, but may in its discretion do so pursuant to this policy, for up to one year from the invoice date. ModernCoinMart (MCM) was launched in 2004 and quickly set the standards for online sales of bullion, US coins and world coins.

Join over 100,000 loyal customers and feel confident purchasing from a company that's spent a decade building a solid and stellar reputation trusted and recognized around the world. That's the MCM way.

This listing is currently undergoing maintenance, we apologise for any inconvenience caused. This item is in the category "Coins & Paper Money\Coins: US\Proof Sets". The seller is "mcm" and is located in this country: US. This item can be shipped worldwide.