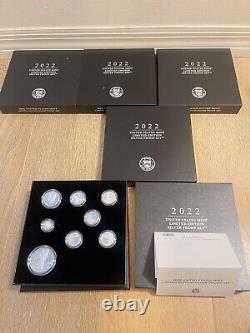 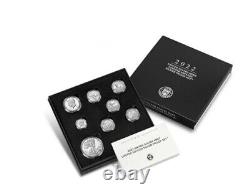 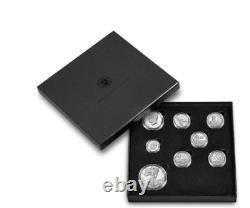 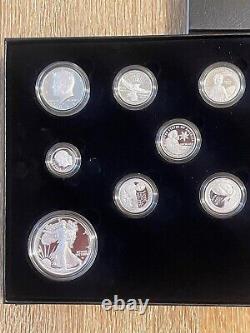 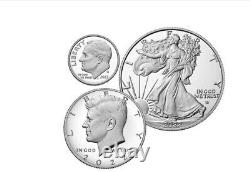 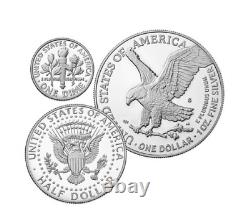 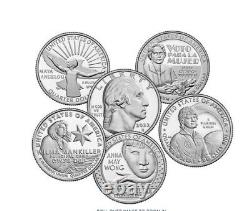 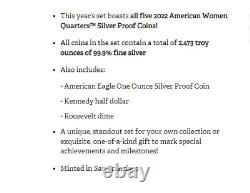 Limited Edition Silver Proof Set 2022. This limited edition set is a must-have for any collector or to mark that special occasion! There's something for everyone in this sparkling set coming in at almost 2.5 troy ounces of 99.9% fine silver. Each coin has a brilliant proof finish enabling mirror-like backgrounds and frosted foregrounds, giving them a special cameo effect. They receive the highest quality strikes possible and are distinguished by their sharpness of detail. The Limited Edition Silver Proof Set includes. All five 2022 American Women QuartersT. Maya Angelou - celebrated author, performer, and social activist. Sally Ride - physicist and first American woman in space. Wilma Mankiller - first woman to be Principal Chief of the Cherokee Nation. Nina Otero-Warren - a leader in New Mexico's suffrage movement. Anna May Wong - first Chinese-American film star in Hollywood. American Eagle One Ounce Silver Proof Coin. The American Eagle One Ounce Silver Proof Coin has a reverse (tails) design depicting an eagle coming in for a landing, carrying an oak branch as if to add it to a nest.

Inscriptions are "UNITED STATES OF AMERICA, " "E PLURIBUS UNUM, " 1 OZ. FINE SILVER, " "2022, " and "ONE DOLLAR. It was designed by Artistic Infusion Program Designer Emily Damstra and sculpted by Medallic Artist Michael Gaudioso. The obverse (heads) features a depiction of Adolph A. Weinman's full-length figure of Liberty in full stride, enveloped in folds of the flag, with her right hand extended and branches of laurel and oak in her left.

Inscriptions are "LIBERTY, " "IN GOD WE TRUST, " and 2022. The set also includes the first five of the coins from the 2022 American Women QuartersT Program, a four-year series of a new program celebrating and honoring the accomplishments and contributions made by prominent American women. Each coin in this series features a common obverse (heads) design depicting a portrait of George Washington. This design was originally composed and sculpted by Laura Gardin Fraser as a candidate entry for the 1932 quarter, which honored the bicentennial of George Washington's birth.

The inscriptions are "LIBERTY, " "IN GOD WE TRUST, " and 2022. The American Women Quarters reverse (tails) designs honor a diverse group of notable American women who made significant contributions in a variety of fields, including suffrage, civil rights, abolition, government, humanities, science, space, and the arts.

The women honored are from ethnically, racially, and geographically diverse backgrounds. The 2022 reverses (tails) of the quarters honor the following American Women. The design depicts Maya Angelou with her arms uplifted. Behind her are a bird in flight and a rising sun, images inspired by her poetry and symbolic of the way she lived. The silhouette of the bird depicts a purple martin, a songbird common to Ms.

The inscriptions are "UNITED STATES OF AMERICA, " "MAYA ANGELOU, " "E PLURIBUS UNUM, " and QUARTER DOLLAR. Sally Ride next to a window on the space shuttle, inspired by her quote, But when I wasn't working, I was usually at a window looking down at Earth.

" The inscription "E PLURIBUS UNUM is intentionally positioned over the Earth next to America, indicating that out of all women in the United States, Dr. Ride was the first into space. The additional inscriptions are "UNITED STATES OF AMERICA, " "QUARTER DOLLAR, " and DR.

This design depicts Wilma Mankiller with a resolute gaze to the future. The wind is at her back and she is wrapped in a traditional shawl. To her left is the seven- pointed star of the Cherokee Nation.

All of the coins in this set are placed in presentation lenses to showcase and preserve their exceptional finish and accompanied by a certificate of authenticity. This item is in the category "Coins & Paper Money\Coins: US\Proof Sets". The seller is "briakrochtenge_0" and is located in this country: US. This item can be shipped to United States.