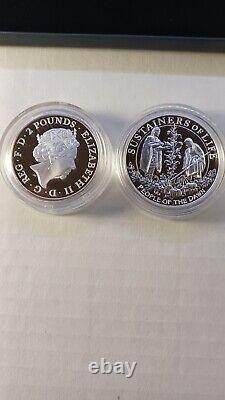 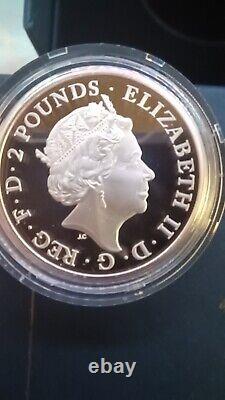 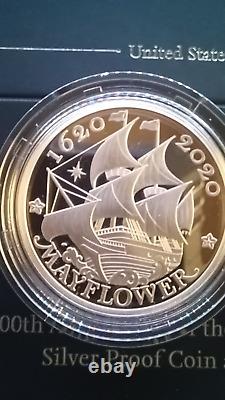 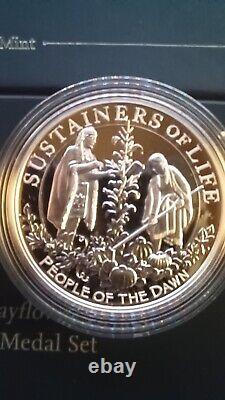 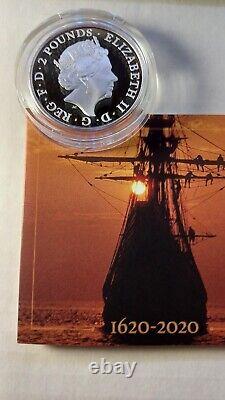 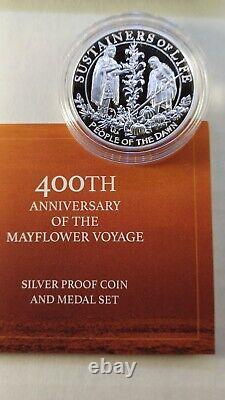 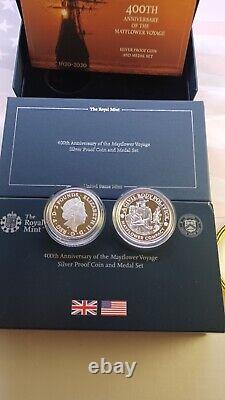 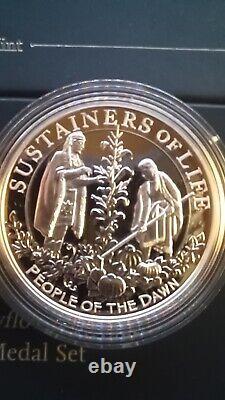 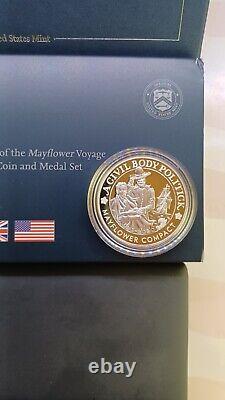 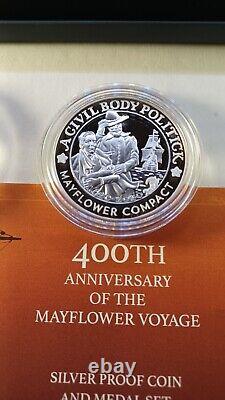 400th Anniversary of the Mayflower Voyage Commemorative. Silver & Gold Proof Coin and U. Composition: 99.9 Fine Silver & Fine Gold. Finish: Proof Standards of both mints. Diameter: 38.61 mm/ 1.598 in. Weight: Coin is 31.21 g. Mint: United Kingdom Royal Mint and United States Philadelphia Mint though neither have a mint mark. Mintage: UK 5,000 sets and US 9,200 sets. Composition: 99.9 Fine Silver. Weight: US Medal is 1 Troy Ounce/31.103g. The UK Royal Mint Limited Edition Set. The UK Royal Mint and the US Mint honor the 400th Anniversary of the Mayflower Voyage with a Silver Proof Coin and Medal Sets.

This is the first American and British pairing of a silver proof coin and a silver proof medal. The United States Mint medal, and the reverse of the UK coins, were all designed by United States Mint Artistic Infusion Program designer Chris Costello, who used multiple stylistic elements to tie the series together. These include the choice of font and North Star on the U. Coin, which connects to the image of the sun in the U.

Coin, symbolizing a new day. That symbolism is also a reference to the Wampanoag people who inhabited the region and were known as the People of the Dawn. The joint 400th Anniversary of the Mayflower Voyage Silver Proof Coin and Medal Set from the United States Mint and The Royal Mint features an exquisite one-ounce silver coin and medal with designs telling the complex narrative of the Mayflower's journey from the American and British historical viewpoints. The two world-renowned mints' close collaboration in producing this unique set reflects the importance of the Mayflower voyage's milestone anniversary to both countries. It also marks the first American-British pairing of a silver coin and medal in the same set, powerful numismatic symbols of the countries' special and enduring relationship.

The dual set's silver medal and coin are artfully crafted to present both nations' perspectives of the Mayflower voyage and its history, lending a deeper and richer context. The United States Mint's 400th Anniversary of the Mayflower Voyage Silver Proof Medal and the reverse of The Royal Mint's Silver Proof Coin feature similarly styled designs, all by United States Mint Artistic Infusion Program artist Chris Costello. The coin and medal for this set are encapsulated and enclosed in a black presentation case. The year "1620, " a mayflower blossom, and "2020" appear on the inside lid of the presentation case.

They are secured in an outer packaging of similar color. An outer sleeve decorated with the U.

The Royal Mint Sets were limited by 5,000 sets and are also numbered on the certification of authenticity. The packaging is different on the Royal Mint Sets though the coin and medal are the same. These 2020 American and British 400th Anniversary of the Mayflower Voyage Proof Silver Coin and Medal Sets come with capsules around the. 925 fine sterling silver with gold plated coin and 99.9 silver medal in a black presentation box.

The set comes with an individual numbered Certificate of Authenticity as well. Her Majesty is shown in the fifth-generation design from Jody Clark.

Costello's reverse design on these coins depicts the Mayflower bursting out of the frame as it sails through the rough seas. A pair of mayflower blossoms flank the design. Inscriptions are "A CIVIL BODY POLITICK, " "1620- 2020, " and MAYFLOWER COMPACT. This item is in the category "Coins & Paper Money\Coins: US\Proof Sets". The seller is "jowigg-19" and is located in this country: US.