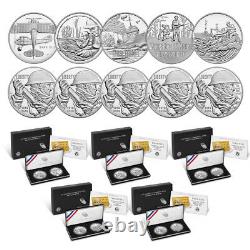 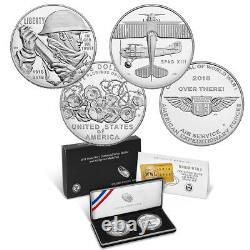 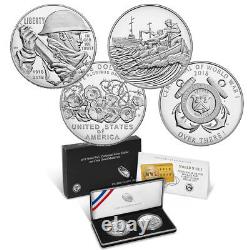 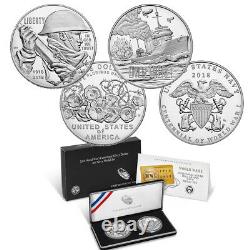 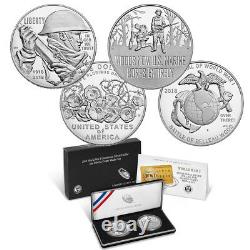 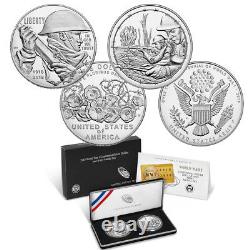 To commemorate the centennial of Americas involvement in World War I and honor the more than 4 million men and women from the United States who served. This set includes a proof silver dollar and a proof silver Coast Guard medal.

Inscriptions include CENTENNIAL OF WORLD WAR I, 2018, OVER THERE! And BATTLE OF BELLEAU WOOD. Obverse: The obverse design depicts a soldier cutting through German barbed wire while a second soldier aims a rifle amid a shattered landscape of broken trees and cratered earth. A shell explodes in the distance. Reverse: The reverse design depicts the United States Army emblem, which was also in use during World War I.

CENTENNIAL OF WORLD WAR I, 2018, and UNITED STATES ARMY. Obverse: The obverse design depicts a U. Navy destroyer on escort duty after deploying a depth charge in defense of a convoy. Above, kite balloons provide Navy personnel a platform to spot submarines and other dangers. Is at the bottom of the design. Reverse: The reverse design depicts an Officers Cap Device used in World War I.

The inscriptions are UNITED STATES NAVY, 2018, and CENTENNIAL OF WORLD WAR I. An official, uniform, seal of the United States Navy had not been adopted at the time of World War I. Obverse: The obverse design depicts an iconic SPAD XIII, a World War I fighter flown by many Americans and valued for its speed, strength, and firepower, viewed from the top and side.