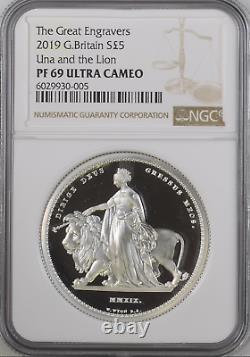 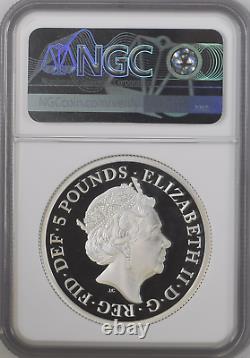 2019 Royal Mint Una and the Lion Silver Proof Two Ounce: NGC PF69. What is this magical coin? Besides the silver coin, a gold version was also struck.

Originally, Una and the Lion was a gold five-pound coin minted in 1839. William Wyon created the coin entirely by hand and the reverse was based on the characters Una and the Lion but Wyon cast a young Queen Victoria as Lady Una, walking a lion which epitomised the strength of the British Empire at the time.

A design which featured a living monarch as a fictional character was bold and controversial at the time, but the execution created one of the most beautiful coins ever produced. The 1839 coin was probably intended only for collectors so just a few hundred were minted, and even that small number carried several variations. The last time the coin was struck was back in the 1880's and the Royal Mint decided to stick with authenticity and created the 2019 silver 2oz Una and the Lion using William Wyon's original die.

The die was remastered to remove any historical blemishes and the proof finish itself was adjusted so that the 2019 coin image would be an exact counterpart of the original 1839 masterpiece. The Reverse (back, tails) shows a young Queen Victoria (as Una) holding a sceptre and walking with a lion.

The legend is DIRIGE DEUS GRESSUS MEOS (May God direct my steps). Below is the date in Roman Numerals as MMXIX (2019), and below that the engravers name: W.

The 2019 silver 2oz Una and the Lion Obverse (front, heads) shows a portrait of Her Majesty Queen Elizabeth II. It was designed by Jody Clark. The legend is ELIZABETH II DG REG FD (Elizabeth II by the Grace of God Queen, Defender of the Faith) and the denomination 5 POUNDS. Lady Una is a character from the epic poem'The Faerie Queene' by Edmund Spenser, written around 1590 during the reign of Elizabeth I. The poem is one of the longest in English literature and is considered as an allegorical work.

In the poem, Una is the beautiful daughter of the King and Queen who were imprisoned by a dragon. Una sets off to free them but encounters a fierce lion who intends to kill her. The lion is so enchanted by Una's beauty and innocence that he decides to help her in her quest and becomes her guardian.

The poem inspired William Wyon who had already worked with Victoria when she was just 15 years old and he had become a personal favourite of the young princess. William Wyon and the Wyon Family.

William Wyon RA was born in Birmingham in 1795 and was the official chief engraver at the Royal Mint from 1828 until his death in 1851. William designed the second and third portraits of George IV, the 1830 effigy of William IV and the'Young Head' portrait of Queen Victoria used on many coins between 1838 to 1887. William was part of maybe the most famous family in British coin history.

His grandfather, uncles, brothers and other members were prominent die engravers and designers, several actually working at the Royal Mint and two becoming Chief Engraver at the Royal Mint. William's son was Leonard Charles Wyon, who engraved many of the Victoria Golden Jubilee coins in 1887. The Monarch: Queen Elizabeth II. Queen Elizabeth II is the current and longest reigning British monarch ever. Born as Princess Elizabeth Alexandra Mary of York on 21 April 1926, the first child of George, Duke of York, and Elizabeth Bowes-Lyon, Duchess of York. Princess Elizabeth's grandfather was King George V and when he died in January 1936 it was Elizabeth's uncle who ascended the throne as Edward VIII. Edward famously abdicated in December 1936 and it was left to Elizabeth's Father George to reluctantly become King George VI. This instantly promoted Elizabeth to Heir Presumptive. On 6 February 1952 she became Queen Elizabeth II in the House of Windsor. Her Coronation was on 2 June 1953.

Her Majesty's Portrait is on the obverse of 2019 silver 2oz Una and the Lion coin. Monarch: Elizabeth II (1952- present). The Britannia Coin Company of Royal Wootton Bassett is part of Gold Traders UK Ltd. We've been trading since 2008 and pride ourselves in offering market leading prices for all types of coins from Royal Mint proof & collectable sets to hammered & ancient coins. Gold Traders prides itself on honesty, integrity and ensuring the best value for customers, which has earned the company many favourable testimonials and positive press reviews too.

The item "2019 Royal Mint Great Engravers Una and the Lion Silver Proof Two Ounce 2oz PF69" is in sale since Wednesday, June 2, 2021. This item is in the category "Coins\Coins\British\Proof Sets/Coins\2000s".

The seller is "britanniacoinco" and is located in Swindon. This item can be shipped worldwide.