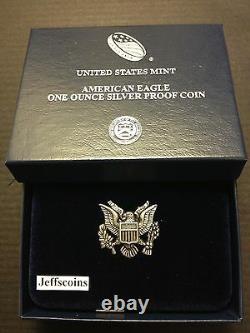 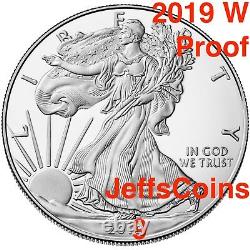 Listing is for a Premium. Version of the American Eagle One Ounce Silver Coin. You will receive the new 2019 Coin with Mint COA and box for each coin you order.

These are the US Mint 33rd reeded edge proof issues. This is not the bullion coin but a special premium collector coin issue. Some coin and packaging images are shown from 2014 or 2018 as examples, you will receive 2019 only. US Mint issued 2019 collector proof coin is packaged in a blue velvet, satin-lined presentation case and accompanied by a Certificate of Authenticity (COA).

Our price may go up at any time based on availability, demand and silver prices. Each Special Proof coin contains the standard one ounce of.

They also may have a very unique feature when compared to other strikes, these are special planchets and handled and packaged differently. Uncirculated and Proof 2019 issues from JeffsCoins have the standard reeded edge unlike the special smooth edge lettering of the 30th anniversary.

Historical Background: The'Fort Knox of Silver' and the Newest Mint. The West Point Mint produces gold, silver and platinum bullion coins. Erected in 1937 as the West Point Bullion Depository, this was originally a storage facility for silver bullion and was nicknamed The Fort Knox of Silver. From 1973 to 1986, West Point produced cents, and in 1980 began striking gold medallions.